So some nice reviews have been rolling in for Matamoros, both the book and the CD. And then I noticed this paragraph from Jim Hynes’s review of the CD in The Daily Ripple on 1/29/2020:

“Dylan had a lengthy song called “Brownsville Girl” but the preeminent comparison is the similarly literate Tom Russell who has practically written novelettes in his albums like Rose of Roscrae and The Man From God Knows Where. Both Kahn and Russell are experts on the wild west, haunted hearts, and Irish fare. Both are, at heart, folk singers. So, if you love these kinds of literate, narrative tales Kahn is a must-listen.”

I knew Tom Russell’s songs, and liked them a lot, especially the storytelling aspects, and his honey-dipped bass voice. Kind of a genuine cowboy poet. But I didn’t know Rose of Roscrae, so I started checking online, saw someone had called it “one of the best albums of 2015,” and ordered it. Then I checked Russell’s website.

Turns out he was playing at McCabe’s in Santa Monica that weekend – but when I called, the show was sold out. Then I saw he was playing at Freight and Salvage in Berkeley the following weekend. So I called my cousin Doug, who’s my music buddy in the Bay Area, we got two tickets for the Berkeley show, and I went up there the next Friday. (For how Doug got me started in my writing career, refer to my video memoir at https://www.youtube.com/watch?v=27GwslOWgc8&t=2s).

Before the show I emailed Russell’s office, and said I’d love to talk to him about the review that compared me to him. They said sure, see him after the show.

Freight and Salvage was pretty packed with enthusiastic Tom Russell fans. Before the set started he gave a shoutout to a guest of his in the audience – Ramblin Jack Elliott – who Tom said was a kind of mentor and longtime buddy.

Now Ramblin Jack was a huge folksinging icon of mine, back in my college days. I think his was the first version of Tennessee Stud I ever heard. And it wasn’t just me who idolized him. After being a traveling mate of Woody Guthrie, he mentored or was a role model for Bob Dylan, Pete Seeger, Jerry Garcia, and a hundred other greats, including Tom Russell. So it was a real treat to see this white-haired, twinkly-eyed 90 year old man in a Greek sailor’s cap holding court in the audience. I wanted to say hi, to tell him we’d met 40 years ago – but I missed my moment.

Still, Russell reiterated he’d be signing and chatting out in the lobby after the show, so I hoped for a twofer – talk to Tom, give him my CD, and shake Ramblin Jack’s hand out in the lobby. I knew he wouldn’t remember me, but I figured he might remember the event of our meeting.

It was in the early 80’s, I was a young ER doctor in Santa Monica. I went into an exam room and evaluated a nice lady who was feeling poorly – I can’t remember what was wrong, and I wouldn’t tell you if I could – but I thought she needed some tests. She asked if I’d talk to her husband in the lobby.

I said sure, and walked out with the chart, checking the contact sheet for her husband’s name. Jack Elliott. I got to the lobby and it was him.

I walked up in astonished awe, and said, “Mr. Elliott – are you Ramblin Jack Elliott?”

I felt stupid, and fumferred that of course I was still a huge fan, and quickly turned the conversation around to his sick wife. That’s the story I wanted to tell Jack after the show.

So when everyone in the audience stood up to give a standing ovation after Tom’s encore, I went out to meet my cousin Doug by the table in the lobby where Tom would be signing CDs. The CDs were all sold out, but there were half a dozen prints left for sale – Russell is also a fine painter – which I never knew before – and his work has an authoritatively original, and kind of naif feel about it.

All of a sudden Ramblin Jack walked up and said to the lady minding the table, “Tom wants me to sign the painting he did of me.” One of the prints was titled The Ballad of Ramblin Jack, a beautiful portrait of Jack’s weathered face. She gave Jack a sharpie and he signed it.

But then, before I could say anything to him, he quickly left. I wanted to go after him and shake his hand and tell him my story, but I also wanted to buy his signed poster, plus I didn’t want to lose my post position with Tom Russell, and it seemed like he’d be here any second. I turned to the table lady and pointed at the print. “Can I buy that?”

She said sure thing, so I did, and just as the transaction was finishing, Tom walked up. I said I just bought his print, and asked if he’d sign it too. He said of course – and while he was doing that, I went into my spiel about the review comparing me to him as a singer-songwriter, and how honored I was by the comparison, and would he take my CD for a listen – which I then handed him.

He took it graciously, and said his office mentioned I might be coming by – so I pushed ahead. “And since the review accused us both of being literate,” I went on, “would you also accept, as a gift, my novel? The songs on the CD are all about characters in the novel.”
So he took that, too. Then cousin Doug took pictures of the two of us. 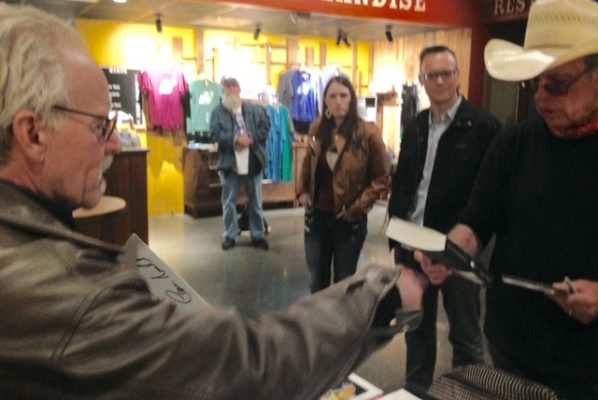 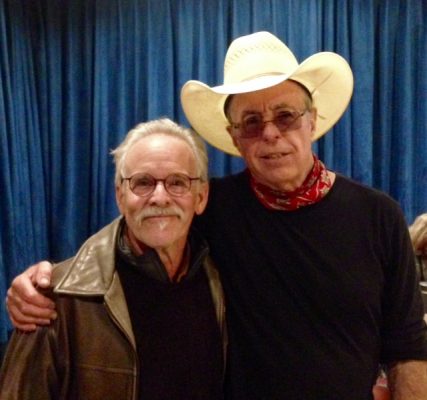 The other autograph seekers were pushing in on us by that point, so Doug and I left, and I called that a good night. The only thing that could have made it better was if I’d been able to tell my story to Ramblin Jack.

So Ramblin Jack, if you ever read this – or Tom, if you read it, and you see Jack – please express my hope that his wife did better.

2 thoughts on “Tom Russell and Ramblin Jack Elliott, too”