For a number of decades I’ve known and admired Tom Russell’s work as a gritty folksinger-songwriter, cowboy poet, Southwest musician – but somehow the notion of him as a painter passed me by. Never even occurred to me he was the artist of his CD covers. I first saw prints of some of his paintings at a gig he played at Freight and Salvage in Berkeley a few weeks ago – and was lucky enough to grab up the signed portrait he did of Ramblin Jack Elliott, which now occupies real estate in my office. That led me to a book of his paintings and musings, The Ballad of Western Expressionism. Now I’m a huge fan.

I’d also never heard the term Western Expressionism before, but it fit this work to a T. I’d long been a devotee of the Western art of Frederick Remington, and C.M. Russell, their paintings of the Old Great American West, a faraway time laced with the mythic romance of the Bold Cowboy, the Noble Indian, the unforgiving desert and the American Expansion West that literally railroaded everything in its path. But these were paintings in the school of realism, getting down the precise, painterly representations of the landscape and its people. Tom Russell’s work paints from the inside out. 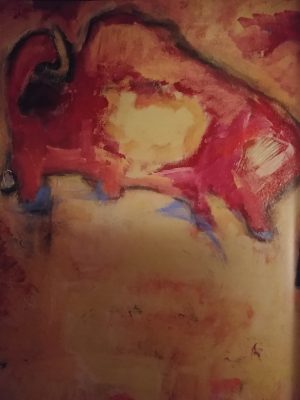 Here are a few cell phone shots taken from his book. I apologize – to Tom, and to anyone reading this – for any distortions in color and accidental cropping my phone rendered from what was on the pages of his book.

But his colors aren’t, in fact, “real life,” they’re much bolder. The colors of his blue coyotes, and cave-painting red buffalo floating in nether space actually remind me a little of Chagall’s floating people and animals. But more raw, like Fritz Scholder or Francis Bacon – especially the portraits. And somehow the anomalous colors of his animals evoke the spirit world. Crows, bison, and coyotes are his totems – crows for the spirit, bison for strength, and coyotes ever the trickster. These are Jungian archetypes that Russell brings to life on the canvass; images you might almost find in Jung’s Red Book. 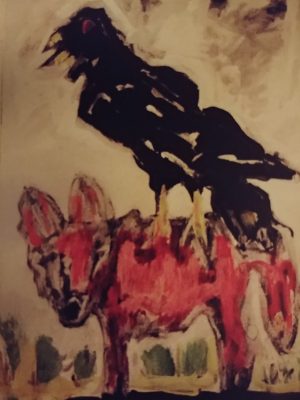 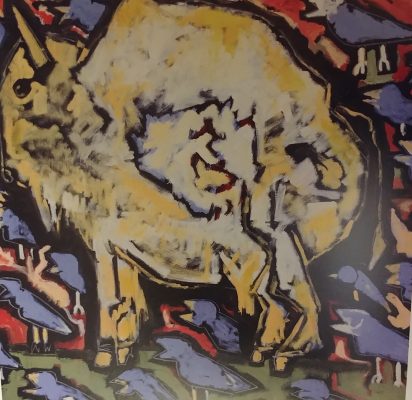 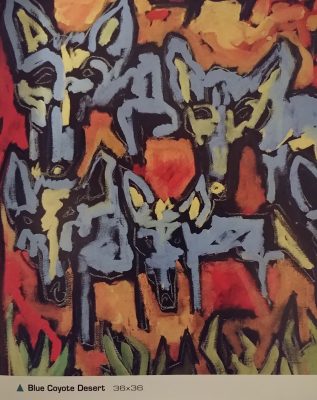 I’m also reminded of two other, older, Western painters – though they are also realists, rather than Expressionists, or “Outsider Artists,” which is another term that comes to mind regarding Russell’s paintings. One early favorite of mine was Maynard Dixon, whose sometimes stark colors remind me of some of Tom Russell’s stuff.

The other artist is Frank Schoonover, an early to mid 20th Century illustrator, who did not only Western art, but pirate and fantasy art for magazines of the time – Scribner’s, American Boy, and others. Because his stuff was for magazine illustration, it was also largely realistic – but some of his pieces, like Buffalo Hunt, gave more of a sense of the hunt than a perfect rendering; a sense of creatures emerging.

Russell’s portraits – of everyone from Dylan to Hemingway to Sonny Terry to Kerouac to Elizabeth Cotton – are similarly Expressionist, or Francis Baconesque (whatever style that might be called) – yet, unexpectedly, Russell’s portraits are completely recognizable. For all the distorted features and primary colors, James Joyce looks like Joyce; Johnny Cash is recognizably Johnny Cash; Ramblin Jack is Ramblin Jack, and Dylan is Dylan. No one would mistake these for photographs, though; more like “spiritgraphs.” 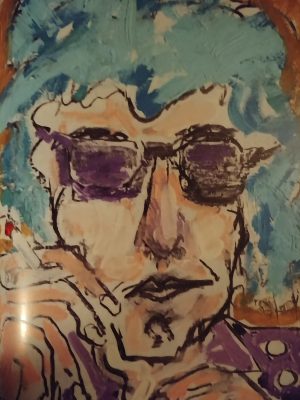 Russell’s book isn’t just a collection of his paintings, though; it features a series of essays, or sometimes just thoughts about his art, or sometimes just stories that come to mind, using the paintings as prompts. And finally, after all his free-flowing commentary – and fascinating memoir – throughout the book, he talks a little at the end about Federico Garcia Lorca’s concept of the duende informing his art – the mystical force, the ghost. Tom Russell’s art is just chock full of duende.

But immersing myself in Tom’s work, and revisiting all this other Western art off my bookshelf, made me ponder why it is I’m drawn to it, city boy that I am. I’m a great lover of mythology of all kinds, though – often sci-fi and fantasy in my own novels – and the Myth of the West has always been one of those loves. In art, the paintings of Remington, Dixon and many others; in fiction it was Shane, and The Virginian, Zane Grey, and later Elmore Leonard’s tales of the West (I loved Valdez is Coming.) In television I grew up on dozens of  Western shows in the 50’s and 60’s – Gunsmoke, Have Gun Will Travel, Maverick, Cheyenne, Yancy Derringer, Wagon Train, Trackdown, The Rebel, Broken Arrow, Wyatt Earp, Bat Masterson, The Lone Ranger, The Cisco Kid, Zorro, Sugarfoot, Laramie, Jim Bowie, Bronco, Elfego Baca, Death Valley Days, The Gray Ghost, Roy Rogers, Gene Autrey, Lawman, Rawhide, The Rifleman, Tales of Wells Fargo, Texas John Slaughter, Tombstone Territory, Wanted Dead or Alive, the list is endless. And as for Western movies, there are too many to enumerate.

Then on further self-reflection, all that elaboration of Legend made me think of The Turner Thesis – subtitled The Role of the Frontier in American History.

Frederick Jackson Turner was a turn-of-the-century historian who first read his basic essay to the American Historical Association, at their meeting in Chicago in 1893 – and it revolutionized American historical thinking. The paper posited that the end of the American Frontier happened at the moment of the publication of the 1890 census, and that moment was a huge turning point in the American consciousness. The 1880 census, and all those previous to it, had described a “Frontier of Settlement” that listed geographies and demographics related to the Westward Expansion. But the 1890 census stated there was no more frontier line. American development – that is, European-based development – had, previous to this, had a “perennial rebirth and fluidity of life, a continuous touch with the primitive,” that no longer existed in any predictable, or even reproducible, way.

“The Frontier was the outer edge of the wave of Western Expansionism – the meeting point between Western Civilization and uncharted primitivism.” 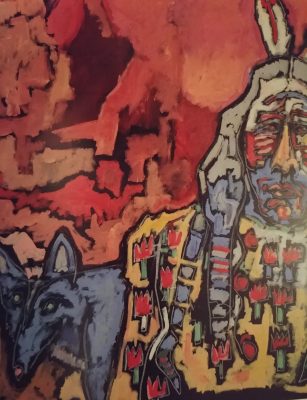 Of course, terms like “primitive,” as applied to Native American peoples, many would say is problematic and freighted with bias. Even terms like “uncharted” can be seen as arrogantly Euro-centric, since the land was hardly “uncharted” by the Native peoples who had lived here for many centuries before us white dudes showed up, all full of our Manifest Destiny. And the interior lives of the indigenous tribes, I suspect, were both charted and rich.

European bias notwithstanding, the fact is that after 1890, we, as a culture, longed for that ancient mythical presence, which we’d all but obliterated with our modern civilization. We romanticized that early time and place, idealized it, yearned to find it again, painted our own versions of cave paintings to picture it, sang songs about it, told stories about it, some with kernels of truth, some made up to mythological proportions.

8 thoughts on “The Art of Tom Russell”