Reading any further will reveal one of the unexpected twists in the first 50 pages of the Matamoros novel. But what I want to talk about here is the song I wrote about that character, Teddy Beale, for the Matamoros CD.

Teddy is the Corporal of the Guard at the U.S. Embassy in Matamoros, a sentry in the compound for the diplomatic mission led by Union Ambassador Leonard Pierce. Pierce himself was an interesting guy, more of a spymaster than diplomat; and chiefly in charge of organizing private armies to make cross-river raids on the Confederate troops stationed at Fort Brown.

Pierce’s main efforts in this regard involved coordinating with Juan Cortina, the Mexican guerrero who fought against the U.S. Cavalry and the Texas Rangers during the Mexican-American War. Cortina always wanted Texas back after that, and so was happy to make common cause with Pierce, fighting the Texas Rangers again. He considered himself a revolutionary, while the Rangers just called him a bandit.

Teddy Beale’s life, though less grand scale, was no less complicated. Because Teddy was actually a woman, posing as a man, to fight in the Union Army. There were hundreds of cross-dressing women like Teddy during the Civil War, and they joined up for a variety of reasons. Some to be with their husbands or fiancés, some for adventure, some because it was the only way not to starve; and some because they were abolitionists, they believed in the Union cause. That was Teddy’s reason.

I created her from an amalgam of several actual secret women soldiers, whose journals or biographies I read in the archives of the Brownsville Historical Association and the University of Texas Rio Grande Valley. But I gave Teddy her own unique voice. 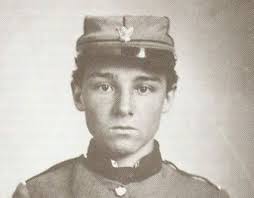 And I made her song about some of the two worlds she embodies, but we all share. Male/female, life/death, good/bad, proud/modest. I played with this theme lyrically in several verses – as when she treads that fine line between life and death (“With a foot in two worlds I flew.”)

But I also tried to manifest this bicameral idea musically, as in the line, “There’s always two worlds in the hearts of men,” when I raised the volume of the harmonizing female voice (the exquisite Shawn Thies) to equal the voice of the male lead (me).

In the song, as in life, I think men, so characteristically intent on rushing into battle with single-minded fervor, have much to learn from women, who often have a more nuanced understanding of those “two worlds in the hearts of men.”

I’ve got the lyrics below, and below that a link to the track, to listen to.

But that ain’t really so real

So I enlisted in the army of Abraham Lincoln in the fight against slavery.

I detested the idea of slavery.

I was proud to wear the Union Blue,

Stayed dressed in camp so nobody knew.

But mounted, with my rifle, well nobody ever trifled with me, small though I may be,

And I acquitted myself by the grace of God with a measure of bravery.

Was on the Red River Campaign,

Strewn on the field of battle like 1000 slaughtered cattle lay those dead boys I once knew,

And I floated above them, like a psalm on the air,

Like smoke from a slow burning book of prayer,

Like a spirit that had no more burdens to bear,

for a time I must’ve been dead too.

With a foot in two worlds I flew; and

Yes, I’ve seen the other side,

The water isn’t so wide,

It’s just a gentle river, like a summertime deliverance for all the folks who’ve died

That’s where I abide.

Of wise words and truths I have none.

But if all the two worlds of my life were lined up from here to the sun,

I’d make those two worlds one.

My mother was full Cheyenne,

Daddy won her in a gamblin’ den

From a God-preachin’ slaver who said he’d bought her just to save her from a brimstone Godless end,

So my folks taught me early in life that there’s always two worlds in the hearts of men.

‘Til I get right

Now the desert air is clear,

Man or woman, it don’t matter out here,

Guess I’ll just wander the sands of these desolate lands ‘til one day my dry bones disappear,