The pirate Jean Lafitte was a colorful character, born around 1780. His grandparents were reportedly Sephardic Jews – his maternal grandfather was put to death for that crime in Spain, his grandmother converting, but nonetheless fleeing to France. Lafitte left Bordeaux for America – ah, those pesky immigrants – where he founded a pirate colony on Barataria Island, then helped General Andrew Jackson defeat the British in the 1814 Battle of New Orleans. He remained a pirate to the end, though – arrggghh! – and after the War of 1812 he went on to found a larger colony of buccaneers on Galveston Island, Texas, raiding primarily Spanish vessels for gold and jewels until his presumed death in 1823.

And where did his vast treasures end up? Many have searched – around New Orleans, Barataria Bay, Galveston, Cuba – but when nothing was found in any of those places, attention turned to the possibilities presented for hiding treasure on Padre Island, the long barrier isle that flanks much of southern Texas, from the Rio Grande almost up to Galveston. 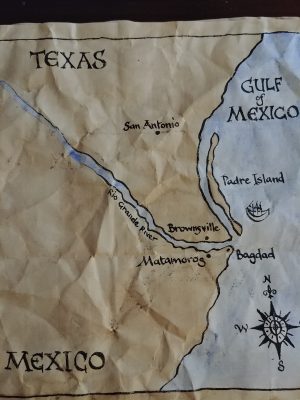 Forty years later – and unabated during the Civil War – treasure hunters were still seeking Lafitte’s spoils. Many scoured around South Padre Island, and even further south – to the port town of Bagdad, where Lafitte was said to have spent some years, reputedly marrying there – though whether that was before or after his one marriage of record is unclear. He was even said by some to have named the town, after the exotic locale of some of his ancestors. Then during the Civil War, Bagdad became the point of embarkation for all the cotton stores gathered up in Matamoros, destined for the English cotton mills – the British payments for those bales financed a large part of the Southern Rebellion. And after the Civil War, Bagdad was a key port for Napoleon’s expeditionary forces trying to conquer Mexico. I guess neither of those ventures turned out so well.

Bagdad itself was wiped off the map in the hurricane of 1867. But that’s another story.

Nonetheless during the Civil War, Bagdad was a wild town – the dark back alley of Matamoros’s grandeur. Full of brothels, gambling houses, seamen from dozens of nations, thieves and scoundrels. From there, just 15 miles north by sea, crossing the mouth of the Rio Grande, is the base of the long finger of Padre Island. And guarding the harbor between them is the small piece of land named Brazos Island. The only town on Brazos is Point Isabel – the location of the lighthouse that guided all those foreign ships in and out, smuggling munitions to the Confederacy and cotton out to Europe. 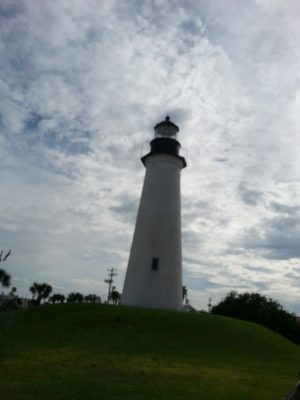 Of course during the war, Reb soldiers stood atop the lighthouse, as well – the first eyes on any Yankee invasion that might come by sea. That didn’t work out so well, either – but it’s complicated.