This is why Matamoros is Dedicated to Gene Ringgold.

When I moved to LA in 1976 – to do my Residency in Emergency Medicine at USC/LA County Hospital – one of my neighbors was a 60 year old man named Gene Ringgold, living with his wife, Margie. Gene was a longtime Hollywood roustabout. He’d been a hoofer in Guys and Dolls, he was Stewart Granger’s stunt double, he was an uncredited supernumerary in many films, and he was a confidante of many of the Silver Screen’s leading ladies of the 40’s, including Joan Crawford, Hedy Lamarr, Gloria Swanson, Rita Hayworth, Bette Davis, and others. He detailed his intimate conversations with them in newsstand pulp magazines and industry pamphlets of the time, and published limited edition books of their filmographies. He ended his working career running a memorabilia shop on Hollywood Boulevard, stocked with mementos given to him by his many movie star friends over the years. 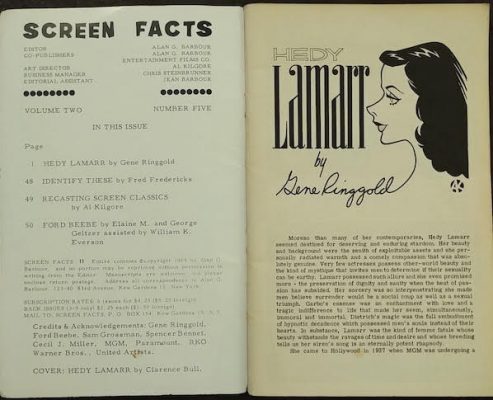 By the time I met him he was retired. Every Thursday evening in his living room he’d hold a screening from his collection of 16 mm films. Just for the neighbors. He called his gathering the John Cosgrove Film Society. He had two projectors set up, so when the first reel was finished, he could start up the second without pause. They were mostly two and three reelers, mostly 30’s and 40’s black and whites. But he did have a color print of Gone With the Wind, which had once been the personal possession of his best friend, John Cosgrove, who’d been the Visual Effects director on that film.

He also had a print of The Maltese Falcon that contained a 90 second scene not screened since the film’s original release – a scene between Sam Spade (Bogart) and his soon to be dead partner, Miles. Gene even had a genuine statuette of the Maltese Falcon – one of four used in the film – sitting on his mantel piece.

And before and after each screening he’d hold court, regaling us with tales of the making of that evening’s flick, either from time he’d spent on the set, or gleaned from table talk spread via his enormous web of below-the-line insiders. And as he wove these tales, he’d serve us with a delicious lemon meringue pie he’d just baked.

But sometimes he talked about his family lore. His great-great-great-great grandfather was Brevet Major Samuel Ringgold, considered the father of modern artillery, and the inventor of what was called “flying artillery,” a type of cannon with wheels that allowed it to be moved rapidly from one area of battle to another. Using this technique under the command of General Zachary Taylor, Sam Ringgold won the Battle of Palo Alto in 1846 – but in the process had his legs blown off, and died 3 days later in Port Isabel, thereby becoming the first American officer killed in the Mexican-American War.

Two years later, in 1848, a fort was built to guard the new border with Mexico, and named Fort Ringgold in his name, about 100 miles upriver from Brownsville, Texas, which is where his family settled after his death, and lived during all the trials and tribulations of the Civil War just a dozen years later.

So my friend, Gene, told me these family stories, and always insisted that I some day make a movie about it. I said I would.

By the early 1980’s Gene was in failing health, from diabetes and heart disease. I became his de facto doctor, since he refused to ever go to a clinic or hospital. So whenever he had a medical problem, I’d make a house call – three houses down from my place – and we’d talk about movies while I temporized his condition. During one episode of terrible chest pain, I called 911 and forced him to go to the ER at Hollywood Presbyterian Med Center. But he signed himself out the next day, and didn’t forgive me for a month, though he never stopped demanding that I make a movie about the stories of all the troubles his family faced in Brownsville and Matamoros, from the War with Mexico to the War Between the States.

Stories of corrupt Quartermaster Charles Russell, of slave-trading Yaqui tribes, of the bandit Cortina and the Union spymaster/diplomat Leonard Pierce.

In February of 1985 Gene had his last episode of crushing chest pain and called me on the phone, asking for help. When I ran over to his house I found him curled on the floor in agony. Again I called paramedics, despite his protestations. I could see this was the end, but I wanted to at least get him somewhere he could get some pain relief. As the paramedics loaded him onto the gurney, I was giving them medical orders. They asked if I was his doctor. I said yes – and his friend.

Gene and I held hands for just a moment, and held eye contact for a little longer, as they wheeled him out. That’s the last I saw him – but I always thought, in that last look, he was asking me not to forget his family’s stories.

He willed me his collection of 167 old movies, around 350 16 mm reels, in metal canisters. The collection weighed a ton. I moved to the Sierras with my family the next year, where I briefly opened a coffee house and showed the films once a week for a while. It never caught on up there, though; I couldn’t recreate the magic bubble he’d made for us in Hollywood, watching his movies and listening to his stories. Or baking his lemon meringue pie, for that matter. I eventually donated the whole collection to the UCLA Film Archives, who could care for them better than I ever could.

But Gene’s stories percolated inside me for over 30 years, until I finally started doing a little part-time research on the history of Brownsville and Matamoros – in libraries, bookstores, online. Gradually the research got more dedicated, and I started playing with story ideas, as well – how to frame the setting, who the characters were, what time period should be bracketed. Eventually I went down to Brownsville, and got access to Brownsville Historical Association documents, and University of Texas Rio Grande Valley historical archives, old letters, diaries, microfiche of the newspaper of record at the time, The Daily Ranchero.

And three years ago, I finally started writing. Not a movie, but a novel.

I guess Gene’s movie will have to wait a bit longer.