Jose Agustin Quintero was a Cuban revolutionary who fled a death sentence and escaped from the Spanish, coming to America in the 1850’s. He went to Harvard, got a law degree, was a poet, translator, and philosopher, becoming friends with Henry Wadsworth Longfellow.

Quintero crossed paths with Jefferson Davis in social circles before the Civil War, and Davis was a great admirer of Longfellow, despite that poet’s abolitionist leanings – but the Longfellow connection was enough to start a friendship between Davis and Quintero. Enough so that when war broke out, Quintero enlisted in the Confederacy, first as a soldier in the Quitman Rifle Brigade.

But Jefferson Davis wanted greater things for Quintero – so he sent him to Matamoros under the guise of being a Diplomatic Consul, while his main duties consisted of organizing the cotton smuggling and gun-running trade for the South.

It was often said, though, that if the South had won, he might well have fought to free the slaves – both out of sympathy with Longfellow’s abolitionism, and out of his own core revolutionary fervor.

In my novel, Matamoros, Quintero is urbane, wily, and a complex sparring partner for the book’s hero, Clay Wilkes – who is up to the task.

Here are the lyrics to the song I wrote about Quintero for the Matamoros companion CD. I decided to make it a kind of revolutionary anthem – in the musical idiom of mariachi and Son Cubano, but in 6/4 time, to give it a kind of rushing, forward movement; like the man himself.

Fled the noose in Havana, with fire in his marrow

He pledged his long life to life-long revolution,

And sailed to the States to avoid prosecution.

He studied and plotted to drive cruel Spain

From his sweet homeland island crushed under their reign,(when he met)

Jefferson Davis, who was scheming secession, (They were)

Cast off the yoke that does lie

‘gainst the Yankee invaders, to fling ‘em to hell, ya know

Jeff Davis sent him down to Matamoros,

Where he shipped Rebel cotton and fired up the chorus…

Of nations to honor the sovereign right

Of Confederate States in their terrible plight,

So he silver-tongued most of the world’s diplomats, (who)

Forsook the Reb Cause like the sniveling rats (they were)

A friend asked Quintero – and what if the South won?

Would you help them spread slav’ry from here to the ocean?

He’d fight to free slaves in the new Southern nation.

Your heart is so wild, es mucho fiero,

Freedom for all, libertad para todos,

Death to the tyrants, muerte a los tiranos.

You can hear the song, and the CD is available at https://jameskahn.hearnow.com/matamoros, which links to CDBaby, Amazon, and all the usual streaming sites. 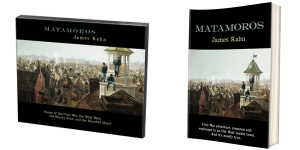 1 thought on “Jose Quintero, the Confederate States of America Consul to Mexico”