On Valentine’s Day I went to Brownsville to do a book signing at the Brownsville Historical Association museum, which is where I’d done some research on the Matamoros novel. The plan was to talk a little about the history of the town, do a 10 minute reading from the book, sing two songs from the CD, and autograph books.

My museum hosts were very gracious – but not many people showed up for the signing. Turns out the local newspaper had advertised the event with the wrong date, and people had been showing up the previous Saturday who I guess didn’t want to be misled twice, so turnout was disappointing.

Even so, those who showed up were enthusiastic and enjoyed themselves, and after my little show I had some nice talks with local amateur historians, and a sweet family from Matamoros who’d come across the border just for this event, grateful to me for giving some attention to their town, whose history was rich, and of which they were proud.

Then after the event I had some fun looking for buildings I’d written about in the book – and found the renovated structures of General Bee’s house, the hospital, and the fort. 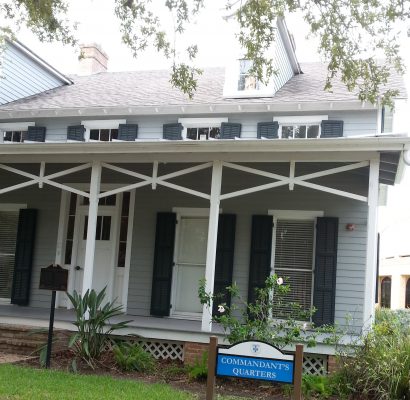 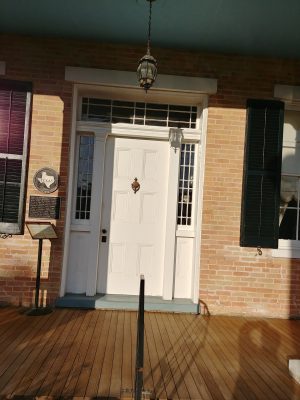 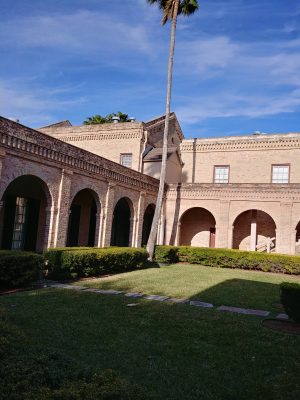 Then there was the jail. There were a few different moments in the book when characters ended up here, and I had an odd frisson seeing it still standing – even though the characters who occupied it in my novel were fictional. Occupational hazard of writers, your characters are alive in your mind, and on the page, so much that they seem real enough that my heart went out to them, seeing the jail they had to endure. 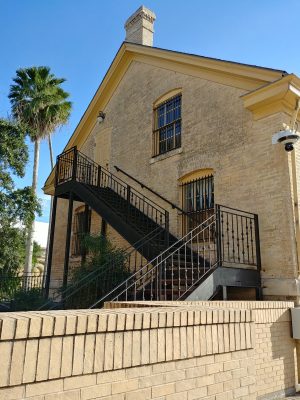 And in the museum I reacquainted myself with an old, old map of the time, delineating the city grids of Brownsville and Matamoros, a map I referred to often when trying to get the geography of the towns right. 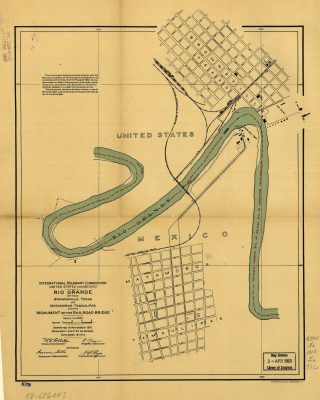 But the book signing wasn’t the only reason I’d come to Brownsville. One of my current projects – in collaboration with a group called Pen Connection – is to collect the stories of immigrants in detention at the border, and publish them in a book. Stories of what drove them to come here, of what the journey was like, or of what their experience in detention is like.

Brownsville doesn’t have a detention facility now, but immigrants who have tried to enter the U.S. at that crossing are being held in a camp on the Mexican side of the border, in Matamoros. So I connected with a group called Team Brownsville, that brings food to those in the camp every day. I wanted to distribute my requests for story submissions, along with notebooks and pens. I was told to meet at the Brownsville bus station at 5.

When I got there, I met a group of a dozen volunteers. They ranged in age from 40’s to 70’s, and they came from all over the country. A few were from a synagogue in New York, with their young rabbi who wore a backwards baseball cap over his yarmulke. There was a retired couple from Canada. There was a lady who drove down from Austin. There were a couple local organizers, who brought the wagons. All good people, all with a sense of purpose.

The wagons were for carrying boxes of food across the border – food prepared by a team from World Central Kitchen, a philanthropic group that puts together teams that get food to the acutely needy all over the world. I’m not sure how they got involved in this particular crisis.

When the wagons were loaded, we walked them across the border – about 5000 steps, according to my Noom step counter. It cost each of us 4 quarters to get through the turnstiles, and then some of us got stopped by Customs to inspect our boxes. There were sandwiches in mine. I also wore a backpack full of writing tablets and pens, in case I could distribute them for story acquisition, but nobody looked in the backpack.

Right next to the crossing on the Matamoros side was a tent city, surrounded by a 10 foot high razor wire topped chain link fence. We had to carry our wagons up a flight of cement steps to get inside. 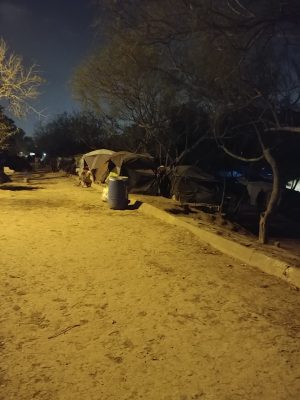 Inside, the atmosphere seemed relaxed and festive. Kids ran around everywhere on the hardpack dirt ground, lots of recycled tents and makeshift habitats – hanging blankets and tarps, leaning cardboard, sheets of recycled plywood. People came and went. Like a huge homeless camp, or a refugee camp anywhere in the world. These photos make it look empty, but I was asked not to take pictures of people, especially kids.

We rolled the wagons to a great white tent, it looked like a glowing portal. 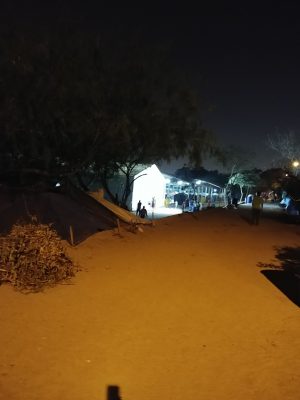 It had a treated canvas floor and about 50 large picnic tables, and started setting up the food at a long table at the back of the tent. Lasagna, salad, tortillas and apples. I was in charge of doling out a dipper of ranch dressing to everyone’s salad – surely a critical task, upon which everything depended. And you’d better believe I was intent on performing my task conscientiously.

We were given aprons, hairnets, latex gloves, and instructions by Alyssa, a young woman chef from Boston who led the World Central Kitchen team that had supervised the cooking of 1500 lunches and dinners every day. And we were instructed to give not only food, but eye contact to everyone we served, and, when feasible, to say “buen provecho,” the equivalent of “bon appetit.”

And then the line started, and didn’t stop for about 3 hours. 1500 people – whole families, mothers with babies, teenagers talking on cell phones, single men, single women, old, young, shy, ebullient, tentative, serious, perplexed, resigned. I saw only one single kid crying the whole night, a tired, cranky, baffled 2 year old. Everyone else gave a humble smile to the servers, everyone was courteous, everyone grateful. Try as I might, I didn’t see a likely terrorist, gangster or druglord among them.

Everyone got a hefty hunk of freshly made, hot, turkey lasagna, a fresh garden salad (except, just like here, some teenagers didn’t eat their greens), a ladle of ranch dressing (courtesy of yours truly), a tortilla provided by the white-haired lady from Connecticut beside me, and an apple handed out by a gaggle of adorable refugee girls ranging in age from 8-11.

When all was done, and all but stragglers back to their tents, the cleanup crew went to work – buff young guys from the camp, paid by World Center Kitchen to shlep boxes, wash out containers, move furniture.

We walked the wagons of empty boxes back out of camp. It was full night now. There were clusters of people sitting around camp stoves, talking or singing, there were kids still running around, but not as many. I got stopped at Customs for my backpack this time – the whole experience was so intense, I’d forgotten all about my notebooks and pens and story project.

But when we got back to the Brownsville Bus Station 5000 steps later, I talked to the organizer about it. She told me about a woman who’d established a little school in the camp. Would I be interested in having her teen class write stories of their refugee experience? I was thrilled at the idea. I gave her my backpack full of notebooks, and she promised to give it to the teacher and put us in email contact.

Part 2 of my Brownsville expedition, mission accomplished. Now onward to the last leg.

Accidentally during the trip-planning process I learned that an old writer friend of mine, David Carren – part of a young writing team on a show I wrote for like a million years ago, Beyond Reality, kind of a pre-X Files demon hunter series – lived in Edinburg, outside of Brownsville. Turns out David is now a professor in the theater department at the University of Texas Rio Grande Valley, where he teaches a screenwriting course. He asked if I’d be a guest lecturer in one class while I was in town. To fall back on a now trite cinematic reference, it was an offer I couldn’t refuse.

Took me about 75 minutes to drive there in my rentacar. OMG I never want to drive on Texas freeways again. I was driving at 70 mph, but every few minutes cars would race past me at 90, weaving in and out, sometimes racing each other. Plus is it still the law in Texas that a driver can have an open can of beer in the cup holder? And then periodically I’d pass a big LED sign that said 324 highway deaths in Texas so far this year, please drive safely. And this was February.

But okay, I got there and found UTRGV to be a modern, pretty, busy university. 30,000 students, I had no idea. Toured the beautiful state of the art Theater Department, and taught a very nice class of undergrads and graduate students, pretty much just extemporizing about how to manage a writing career while working in the real world, and peppering it with hard-earned lessons and pointers about getting writing jobs, how to mine their life experiences for stories, and most importantly, how to keep rewriting and rewriting until a presentable script emerges.

I told them that all writers have a short phrase deeply embedded in them, that informs all their writing, and it would help their writing to be in touch with that message. For me, it’s “the masks we wear.” Other writers I’ve known have identified different notions: “I’ve got a secret,” “Life changes in a hurry,” “I’ll get even,” “Karma’s a bitch,” “We’re all one.” Writers need to learn their soul’s private code, and use it in their creations.

By the end of the class I was struck by how these students – like the immigrants in the tent city – were courteous, curious, intelligent, grateful. And mostly of Hispanic heritage.

It’s rare, in my experience, for all the different parts of your life to come together in a single event – here, the event of my road trip weekend – but it’s a sweet moment, and I’d like to thank whatever Event Planner was responsible.

8 thoughts on “Brownsville/Matamoros – Then and Now”